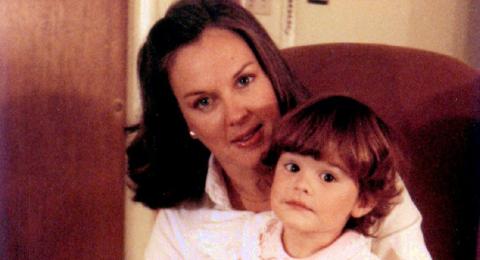 Because Meals on Wheels is a valued resource for caregivers, we aim to provide information that caregivers may find useful. This is the first in an occasional series called “Caregiving in Quicksand,” a personal look at being a caregiver by Marketing Director Lauren Edstrom.

Lately when phone conversations leave me more frustrated than satisfied, I try to remember my mom, back when she was my mom.

She had the same routine every morning, and getting ready for the day was an art. She always did her hair, and was very specific about her makeup. I remember that she did my makeup for prom, and some of my friends asked her to do theirs. I was embarrassed then, because I was worried they wouldn’t like what she’d done, but of course they did.

My mom made friends so easily. Everyone liked her. I was always complimented about how sweet she was.

My parents divorced when I was eight, and when we had to leave the house and move into an apartment in another part of town, my world got bigger and smaller at the same time. I knew that she would take care of me, but part of me started to look out for her too.

All of my friends in high school called her “the nun” because I always had the earliest curfew and I could never go to the parties everyone else could. We didn’t do things together that other girls did with their moms. We went to the movies. Sometimes went shopping but we didn’t have much in common and that became even clearer as I got older.

When I graduated college, it was almost like my mom knew I didn’t need her anymore, even though I did. She started to unravel from what I know now to be a series of traumatic events she experienced throughout her life. She made what I call some very illogical decisions which led her financial situation to be dire. I found myself working full time and making sure she had food and shelter, all while making sure I had the same. She tried to do something about it, but she also had many reasons why certain opportunities wouldn’t work for her. She found a groove working as a temp, because once again, everyone loved her and she became one of the most requested temps at this agency.

A few years after graduation I went to California for a week, and when I returned she cracked open the door and said “Now don’t freak out.” When she opened the door she had a huge black eye, and her skin bruised. She’d fallen on a walk. She tripped and her head hit the curb. She said a young man helped her and drove her back home, because she was bleeding and confused by what had happened. She went to the doctor, but they said she’d be fine and sent her home. No x-rays, no head trauma exam, just that she’d be fine.

It wasn’t until a few years later I noticed that she was becoming less and less like the mother I had grown up with. She wasn’t taking care of herself, she was full of anxiety, and she was forgetful – yet nothing too alarming. Four years after her fall, she hadn’t been sleeping. I was getting married and she was not involved or seemingly interested in the wedding planning at all. I was starting to think that something was really wrong, but she denied it and got visibly upset whenever I tried to bring it up.

Soon after the wedding, we moved her to be closer to us and she seemed excited and nervous and unsure. She had friends, and a routine at home and she’d lived in that apartment for 20 years. Her new place was safe, newer, cleaner and closer to family. But most importantly it was too new for her. She became depressed but she didn’t know it. She was forgetting more, but not acknowledging it. I finally convinced her to see a doctor and take a neuro-psych test to rule out Alzheimer’s.

Her anxiety of this test was sky high, and at the results reveal, hearing the word dementia was not something she was going to accept. My mother has reasons for everything; I call them excuses, and she calls them reasons. She is a master of spinning words and events. She wasn’t going to accept this, and as far as she was concerned she certainly wasn’t exhibiting early signs of dementia. She was referred to a psychologist to work on some anxiety issues, and then instructed to try the test again in a year. She refused.

Every day I call her at the same time on my way home from work. I make sure she sees her grandson, and has an opportunity to spend time with my husband’s family, but she cannot interact with other people anymore. She doesn’t know how to have conversations. It’s like she doesn’t remember how that works. She smiles and she’s polite but she’s just there; she’s not really THERE.

Shortly before my son was born she started talking to me as if I was someone else and referred to me in the third person. That has become more and more of our daily routine. When she calls me, she asks to speak to her daughter. She can no longer go to doctor appointments on her own, and she can’t handle any of her finances. Since I’ve started to help her more and more with daily activities she says things like “when I spoke with the man in the office” or “the other girl that helps me with my banking” or “the kids are helping me with that.” All of those people are me, just me.

My mom has severe anxiety, and she’s working with a few people trying to help her with her issues and memory troubles, but no one can explain why she sees me as another person or other people. She even calls me her mother. She takes care of herself. She looks forward to her Meals on Wheels and cooks herself the same three things for dinner every night. She can drive and get to the store and my house and she gives rides to her friends, but doesn’t know who I am to her. When I ask her she denies it and laughs and says “of course I know you’re my daughter.”

It’s a strange feeling to not have a diagnosis, or a reason why my life has shifted the way it has. Because of those things, it’s so hard to come to terms with the feeling like I’ve lost my mother even though she’s still here. I need to know that there are others out there sharing similar feelings. I think that’s why I wanted to start this blog. I became a caregiver at 28. I don’t have the burden to share with brothers or sisters. My mother is one of eight children. She has nieces and nephews I’ve never even met. Some days I would give anything to lean on my relatives, but we’re only a family on paper.

This blog is for all the people that don’t have a friend that can identify with you. This blog is for sons and daughters, friends and family just taking it one day at a time, and running on the only fuel they’ve got – love. If you’re out there, and identify with any of my unidentifiable emotions as an only child or a caregiver or just a person, come back to visit this blog. I’ll continue to share real life instances, struggles and moments of light, and also resources that I’ve found to be most helpful.

This post is also featured on Lauren’s personal blog, afamilyonpaper.